(Fields have eyes, forests have ears.)

When I first heard this cryptic sentence (a “Sprichwort” in German) from poet Oswald Egger, I understood that it had to do with the fundamental difference between sight and sound. But I thought: fields must (also) have ears. (And: whose?)

The series of pieces named fields have ears represent my attempts to come to compositional terms with different notions of “fields”: how we hear them, how they might hear themselves, and what there is to hear.
My idea of the field is a grid (pictured). 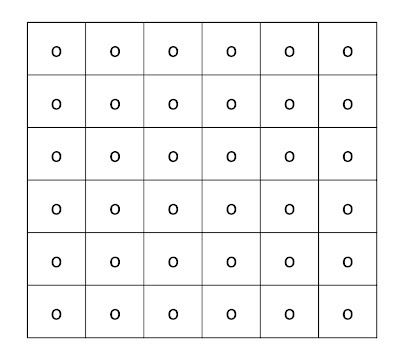 I find the implication that there are “ears” everywhere, at every point in a world, a fascinating concept, even if it is rather hard to imagine. It implies that position might be more important than time in hearing; and that the sounding configuration of a world can be understood (differently) from an infinite number of points. It says that what is audible to any one person is unique, but at the same time contiguous (and therefore directly related) to what is audible to others.
So the series is about creating (or rather, imagining) configurations of sounds in a “field.”
At the moment the series consists of eight works:

(1) for solo piano with four channel playback (which has field recordings, sine tones and noise). 20’ (2008) (recorded on another timbre 037 by Philip Thomas)

(4) for an ensemble of at least four musicians. 27’40” (2009) (recorded on another timbre by Philip Thomas, Dominic Lash, Patrick Farmer, Sarah Hughes and the Edges Ensemble)

It would take a much longer article to go into the details of each piece, but I will try to sketch out the general areas of interest. The series progresses, point by point, through a set of compositional questions.
Initially, I had wanted to situate an “ear” (a musician playing a piano) in the midst of a field (represented by the four speakers in the corners of the room). In fields have ears (1), the pianist is asked to place sounds below, within and just above the levels of the environment I provided (which put versions of the same location in each speaker, mixed with an ascending scale of sine tones and a series of white noises at formal junctures). In fields have ears (2) the field recordings were replaced by live performers (playing sine tones and noises) in the four corners–but with the piano still in the middle. In both cases the “where” of a sound was at least as important as the “when” of a sound.

With fields have ears (3a/b) and fields have ears (4), something new entered the series: the idea of change. Fields change over time, listening changes our relationship to the field. Both pieces tried to create gradual changes within what would be recognized as the same field (or world).

fields have ears (5) crystallized another feature of the evolving series: the tendency of pitch elements to rise just slightly above the noise (to be, in the terms of this piece, the “condensation” of the vapor of noise).

fields have ears (6) was the first piece in the series to flesh out the four corners of the first two with a full-fledged grid (of 8 by 8 sounds in time). Since, in fact this was the last completed, I will say more about it at the end.

fields have ears (7) took this “virtual” grid of (6) and set it up on stage, as a set of 25 (5 x 5) squares – with loudspeakers in the four corners and performers moving between the stations of the grid on stage.

fields have ears (8) vastly enlarged this stage grid (to 80 units), but simplified the sound producing mechanisms so that virtually any performer could feel they were in the midst of a field with ears.

The experience of the series has given me a deeper awareness of the configuration of sound: spatial, harmonic, contingent, layered.

The largest, longest and most difficult piece of the series is the one recently released on Gravity Wave: fields have ears (6). For reasons that I discuss in the notes to the disc itself, the piece kept growing with each performance. It began with me laying out, in score form, a grid of bars in which tones and chords for the guitar could be “planted.” At the root, this was some kind of harmonic scheme (something like a long, complex, passacaglia). I wanted to reinforce the roots of the harmony, and thus created a series of sine tones to go along with the guitar chords.

However, in successive performances, as I kept adding elements, I began to appreciate how, in a field, one never actually sees the roots. That is, the growth somehow implies roots without making them visible. I wanted to create the sense of something that had, at a very deep layer, a solid root system, or architecture, but then allow this to be almost completely obscured by the growth upward from those roots.

I have always been attracted to things that one knows to have a structure, but which at the same time, don’t present that structure completely. Long take field recordings have this character: they clearly come from a place, but their shape in time is much more subtle than any musical form. The number pi also has this character: we know that the places after the decimal are determined. We can learn (some of) them; we can calculate them, but we cannot confront that structure directly (most of it will always remain hidden).

So as I kept piling on elements to the piece, I began to feel (despite the complexity) more and more at home in the environment it presented: one that suggested that the configuration of a world presents itself to our senses and feelings long before our minds know what to do with it.
Posted by Michael Pisaro at 11:54 PM 4 comments: